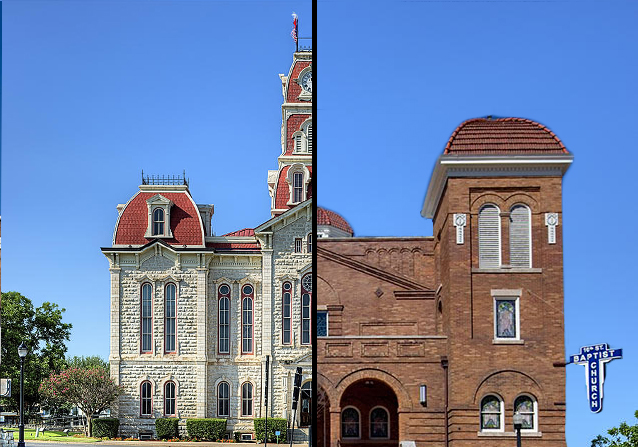 The surprising connections between churches and courthouses.

The separation of Church and state is one of the pillars of modern western society. Today, we all enjoy the freedom of religious expression. People base their lives and morals on more than just rules and laws. In fact, they have views, ideas, and beliefs. The government, on the other hand, acts by following a spiritually unbiased system.

Having said that, there are still many similarities between courthouses and churches.

These affinities data back to several centuries, and they’re tied to the evolution of our society.

Both churches and courthouses are very important places for the communities. In these buildings, people gather, listen, come together, and perform useful social functions.

In some ways, the courts and the Church are almost mirror images of one another. These similarities also affect the sheer layout and design of the rooms which host them. For example, the judge would occupy a very similar place as a deacon would in a church. They both hold authority positions, and their location matters. Their actual physical placement within the court can highlight their particular status.

The similitudes between the Church and the courts go a long way back. In ancient history, the Church was often the core of the community. This was true even long before legality became an established force, ruling our lifestyle as it does today. In ancient times, religious leaders were the ones to determine the administration of justice and other matters. In addition to that, the Church often undertook important clerical tasks. It was one of the first entities to ever record the population through censuses and other activities, among other things.

To this day, we owe a lot of our historical and genealogical knowledge to clerical archives!

Over time, governing bodies, and religious authority acquired different roles. The separation happened gradually. It led to the legal system as we know it today throughout most of the world. The heritage of such a long history can still be witnessed to this very day. Whenever you walk into a courtroom, or in a church, that spirit is still very much alive.

Churches are known as examples of stunning architecture. Their style is visually striking, aiming to really make an impression on visitors. Courthouse buildings, especially historical facilities, actually have layouts that closely reminisce that of churches. There’s usually a beautiful entrance, often adorned by columns or arches, as well as a tower, which makes the building closely identifiable within the community.

Much like a Church building, a courthouse aims to be highly recognizable. Back when cities were smaller, courthouses would have been among the most important buildings in the whole settlement, and probably some of the earliest “proper” buildings to be established, before massive population spikes and big residential constructions would eventually skyrocket the size of urban areas. This trend is particularly prominent in some parts of America, where courthouses are actually highly coveted historical buildings, which still stand out as important landmarks. A courthouse, just like a church or a library, is an important location for a city, and in some cases, it can also become one of its most famous features, even attracting tourists and other visitors!

The separation of Church and state.

The idea of two distinct concepts for Church and state mainly comes from Christianity.

There wasn’t always a clear dividing line between government, legality, and spirituality. In some cultures, important legal and political decision-making was only possible with the direct influence of spiritual leaders. In most cases, they were still deeply tied in superstitious beliefs, such as the interpretation of various natural phenomena. Throughout history, religious leaders in the Christian world also had a massive impact on other spheres, such as politics and legality. However, the separation between Church and the legal system became more predominant through the ages.

The most significant remnant of the past is to be found in the layout and functionality of courts today. The jury, for example, represents the people.

Jurors and church audiences are similar in some respects. Much like jurors are there to witness a trial, hear the evidence and eventually contribute to an outcome, churchgoers are there to witness the glory of the Lord, and participate in important community rituals, which means so much to our cultural identity.

The idea of a secular government became even more solidified in the world during the massive wave of immigration to the United States. Many people moved from Europe to the new world, in search of religious freedom.

All these different spiritual minorities needed an unbiased, secular legal system and government body, as a way to preserve individual religious freedom and personal liberty. These are some of the most important values at the basis of America (and many other countries throughout the world), from the founding fathers to our very present day.

In addition to that, state legislatures also wanted to prevent the diversion of significant government funding to parochial and ecclesiastic educational facilities. This factor became yet another driving motive for the distinct rift between the Church and the state. Such a trend can also be linked with the First and the Fourteenth amendments to the US Constitution.

In conclusion, while the law and the Church are two different bodies, they share common roots. They can most likely be traced back to the very beginning of human society. These institutions date back to an essential need of people: coming together. Both the Church and the law gave us a common frame. A way to relate to one another, even without necessarily sharing deeper personal connections. The need for a central authority, the involvement of the people, the reverence for power, and the respect for certain roles are all shared values. These have definitely translated to both the religious and the legal fields over the ages.